BENGALURU: Reliance Industries said it hopes to formalise its partnership with Aramco this year and its Chairman Yasir Al-Rumayyan will join the Indian conglomerate's board as an independent director.

Reliance Industries said it hopes to formalise its partnership with Aramco this year and its Chairman Yasir Al-Rumayyan will join the Indian conglomerate's board as an independent director.

'Al-Rumayyan joining our board is also the beginning of internationalisation of Reliance,' Chairman Mukesh Ambani told shareholders on Thursday.

Reliance had announced a sale of a 20 per cent stake in its oil-to-chemicals business for $15 billion in 2019 to Aramco, the world's top oil exporting firm.

ABU DHABI: Masdar, a subsidiary of Mubadala Investment Company and one of the world’s leading renewable energy companies, has announced a strategic agreement with Iraq to develop solar photovoltaic (PV) projects in the country with a minimum total capacity of 2 GW (gigawatts).

Iraq, the second-largest oil producer in the Organisation of Petroleum Exporting Countries (Opec) group, is looking to increase the percentage of renewables in its total power production capacity by the end of this decade to address supply issues and meet climate objectives.

The project was one of the largest renewable PV solar projects in the Middle East, and falls within the vision of Iraq’s sustainable transition plan 2021- 2030.

The project delivers 2 GW of green energy for Iraq national network, she stated

According to her, a steering committee of both parties has been established for this goal. 'The business model is Independent Power Producer, and the investment will be according to law13-2006 of the National Investment Commission.

Iraq is targeting 20 to 25 per cent of energy coming from renewable sources.

ABU DHABI: Industrial chemical zone TA’ZIZ and Fertiglobe, an Adnoc and OCI company and a global leader in urea and ammonia, have signed an agreement for Fertiglobe to join the world-scale blue ammonia production project at TA’ZIZ in Ruwais, Abu Dhabi.

The project benefits from its location in the purpose-built TA’ZIZ Industrial Chemicals Zone, adjacent to the Ruwais Industrial Complex, which will supply the project with attractive hydrogen and nitrogen feedstocks. The agreement is subject to regulatory approvals.

The companies will jointly conduct pre-FEED and FEED activities and in parallel Adnoc will undertake a sole-risk feasibility study on blue ammonia. The final investment decision is expected in 2022, and start-up is targeted for 2025.

Blue ammonia is made from nitrogen and 'blue' hydrogen derived from natural gas feedstocks, with the carbon dioxide by-product from hydrogen production captured and stored. 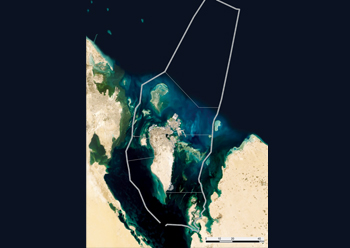