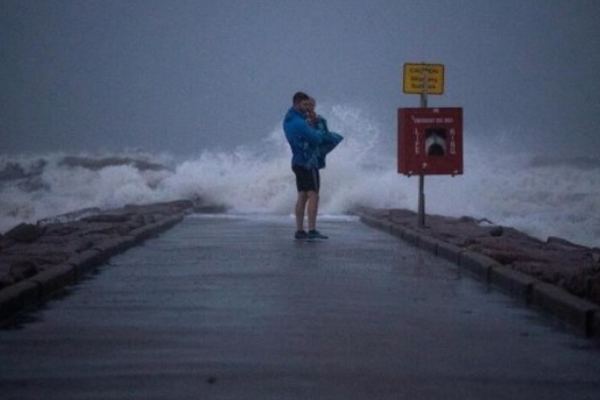 Evacuations were underway from offshore US Gulf of Mexico oil platforms as onshore oil refiners began preparing for rain and heavy winds from a second hurricane in as many weeks.
Hurricane Nicholas was taking aim at the central Texas coast with 75 miles per hour (120 kph) winds, threatening to bring heavy rain to Texas and parts of Louisiana still recovering from Hurricane Ida.
Life-threatening flash floods from up to 12 inches of rain are possible along the upper Texas coast to southwest Louisiana. Nicholas intensified into a category one hurricane late Monday but is not expected to strengthen further, the National Hurricane Center said.
Nicholas is the second cyclone to threaten the US Gulf Coast energy complex in recent weeks. Hurricane Ida wreaked havoc on oil production and refining facilities in late August and early September. Some 113,000 Louisiana homes and businesses have been without power since Ida struck.
IDA DAMAGE
More than 40 per cent of the US Gulf of Mexico's oil and gas output remained offline on Monday, two weeks after Ida slammed into the Louisiana coast, according to offshore regulator Bureau of Safety and Environmental Enforcement (BSEE).
Damages to an offshore hub that pumps oil and gas from three major oilfields for processing onshore and power outages at onshore processing plants are responsible for the production losses.
Royal Dutch Shell said it had begun evacuating non-essential personnel from its Perdido platform, which was unaffected by Ida. Occidental Petroleum Corp said it was implementing procedures to safeguard workers, signaling its own offshore evacuations.
Shippers were warned of hurricane-force winds at oil export terminals on the Texas coast. The Houston Ship Channel, a 53-mile (85 km) waterway crucial to oil and fuel exports, halted all traffic, and the Aransas-Corpus Christi pilots suspended activities due to heavy seas.
There were 55,000 homes and businesses without power late Monday, according to tracking website PowerOutage.com.
Oil refiners Citgo Petroleum, Exxon Mobil Corp, Phillips 66, and Shell said they were preparing some of their Texas and Louisiana coastal plants for severe weather.
SLOW STORM
"The big thing is going to be the rain. It's going to be a slow-moving storm. When storms move at 5 of 8 miles per hour it can take a while for them to clear out," said Phil Klotzbach, a researcher at Colorado State University.
US crude oil futures rose at the open in Asia on Tuesday after climbing 1 per cent on Monday to $70.45 a barrel on continued disruptions to offshore production.
Oil imports and exports face potential delays from Nicholas. Vessels that were unable to load or discharge during Ida could be prevented from reaching ports again, shippers said.
The first supertanker scheduled to dock since Ida at the Louisiana Offshore Oil Port (LOOP), the largest US privately owned terminal for crude exports and imports, has yet to load, according to Refinitiv Eikon vessel tracking. --Reuters
Share