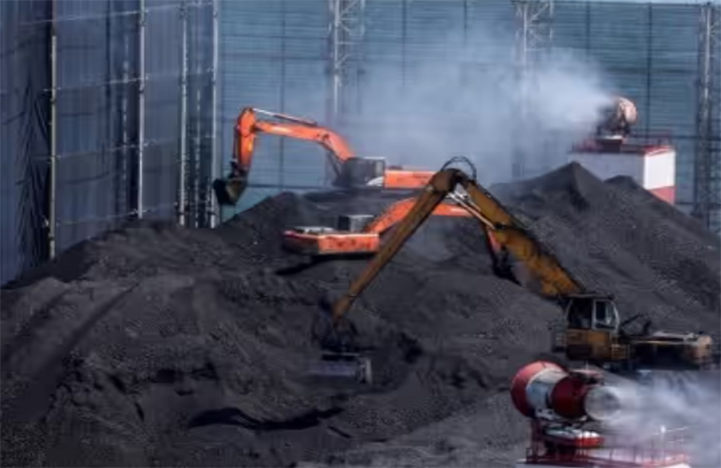 Indian companies are using Asian currencies more often to pay for Russian coal imports, according to customs documents and industry sources, avoiding the US dollar and cutting the risk of breaching Western sanctions against Moscow.
Reuters previously reported on a large Indian coal deal involving the Chinese yuan, but the customs data underline how non-dollar settlements are becoming commonplace.
India has aggressively stepped up purchases of Russian oil and coal since the war in Ukraine began, helping to cushion Moscow from the effects of sanctions and allowing New Delhi to secure raw materials at discounts compared to supplies from other countries.
Russia became India's third-largest coal supplier in July, with imports rising by over a fifth compared with June to a record 2.06 million tonnes.
In June, Indian buyers paid for at least 742,000 tonnes of Russian coal using currencies other than the US dollar, according to a summary of deals compiled by a trade source based in India using customs documents and shared with Reuters, equal to 44 per cent of the 1.7 million of tonnes of Russian imports that month.
Indian steelmakers and cement manufacturers have bought Russian coal using the United Arab Emirates dirham, Hong Kong dollar, yuan and euro in recent weeks, according to customs documents separately reviewed by Reuters.
The yuan accounted for 31 per cent of the non-US dollar payments for Russian coal in June and the Hong Kong dollar for 28 per cent. The euro made up under a quarter and the Emirati dirham around one-sixth, the data from the trade source showed.
India's Ministry of Finance, which administers the customs board, did not respond to emails seeking comment confirming the documents. The Ministry of Commerce and Industry declined to comment.
The Reserve Bank of India also did not respond to requests for comment.
The RBI has approved payments for commodities in the Indian rupee, a move it expects to boost bilateral trade with Russia in its own currency.
The US dollar has been the dominant currency for Indian commodity imports, traders said, and the greenback makes up most of the country's foreign exchange reserves.
For deals in a currency other than the dollar, lenders would potentially have to send dollars to bank branches in the country of the original currency, or banks they have tie-ups with, in exchange for that currency to settle the trade.
KEEPING DOLLAR AT A DISTANCE
Two traders based in India that purchase coal for domestic customers and a trader based in Europe that deals with Russian coal said they expected the share of non-dollar transactions for Russian coal to increase as banks and other parties explore ways of cushioning themselves against any further tightening of sanctions.
Buying Russian coal using the US dollar is not illegal for Indian firms.
Reuters was able to corroborate customs documents for four of the 11 vessels in the summary of Russian coal trades in June provided by the trade source, which showed payments made using the yuan, euro and the Emirati dirham, using shiptracking data and by speaking to a private customs agent based in India.
Another three vessels in the 11 deals in the trader's summary were paid for using the Hong Kong dollar and the yuan, two trade sources familiar with the transactions confirmed.
In one of those three deals, Jindal Steel and Power Ltd (JSPL) imported 79,721 tonnes of so-called PCI coal in the vessel Zheng Kai from Russia's Ust-Luga port using yuan, according to the two sources.
Rival steelmaker Arcelormittal Nippon Steel India shipped in 35,000 tonnes of Russian anthracite coal using euros, a customs document dated June 15 showed.
JSPL and Arcelormittal Nippon declined to comment.
Non-dollar imports continued into July.
Two Indian customs documents from last month reviewed by Reuters showed that Indian companies agreed to pay for Russian coal using Hong Kong dollars and Emirati dirhams.
India's JK Lakshmi Cement imported 10,000 tonnes of Russian thermal coal in the bulk vessel Ada, according to a customs document dated July 20. The invoice was valued at 14.62 million Emirati dirhams ($3.98 million), and trader Swiss Singapore facilitated the deal.
JK Lakshmi did not respond to calls or emails requesting a comment. Swiss Singapore, owned by Indian conglomerate Aditya Birla Group, did not respond to requests seeking comment.
Indian coal trader Chettinad Logistics imported 25,000 tonnes of Russian thermal coal from Singapore-based trader Avani Resources and paid in Hong Kong dollars, another customs document dated July 20 showed.
Reuters was unable to contact Chettinad Logistics. Avani did not respond to an email seeking comment. - Reuters
Share