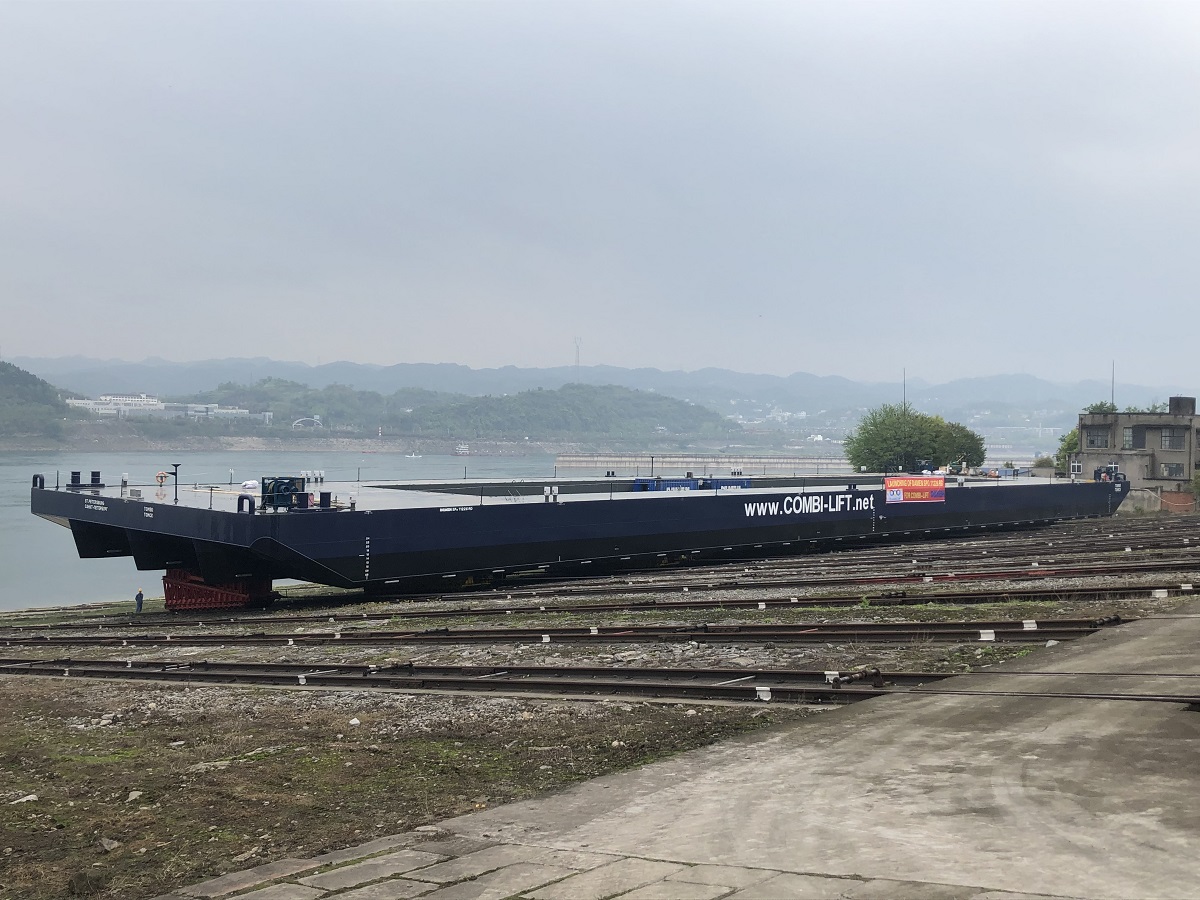 Damen has announced that it has successfully delivered the 111-metre Damen Stan Pontoon 11226 RD mega-barge Tomsk to Combi Lift, for a major work at a gas processing project site in Russia.
A leading expert in the transport of heavy lift and project cargoes world-wide, Combi Lift returned to Damen for this latest order based on the high quality of the original vessels and its ability to meet tight deadlines for delivery, and the Tomsk was indeed delivered within time, on budget and to the agreed specification regarding deadweight and quality.
In total, Combi Lift is responsible for moving 176,000 tonnes of equipment and material that is required at the site of the new facility.
The Tomsk will be tasked with transporting some of the largest components, including two, oversized heavy items that are critical for the operation of the processing plant. Hence the importance of the precise timing of the delivery.
The timeline for the project got underway on May 14 last year when the contract was signed, followed by steel cutting commencing at Damen Yichang Shipyard three months later in August.
The barge was launched last month with a delivery ceremony (without the barge) taking place on the April 19 in Bremen, Germany.
The barge will be operated by AAS Amur Assets Shipping Limited, a joint venture set up by Combi Lift to support its role in the construction of Gazprom’s Amur Gas Processing Plant, 150 km from Russia’s border with China. It will be used in transporting some of the largest components to the site.
This contract follows a nineteen vessel order placed with Damen by Combi Lift that was delivered in May 2018. It comprised four Multi Cat 2608SD workboats, four Pusher Tugs 2612SD, four Side Floaters 8605SD and seven 89-metre Stan Pontoons 8916SD. Measuring 111.75m by 26.4m and with a deadweight of 5,700 tonnes, the Tomsk is almost twice the size of its smaller counterparts.
This was achieved despite the many constraints imposed by the Covid-19 pandemic, thanks to the Herculean efforts made by the yard and excellent cooperation among all the counterparties involved.
Like the earlier Damen vessels operating there, the new barge has been designed to navigate the very shallow inland waters in which it will operate. This involved minimising the weight while maximising the length and beam so as to increase buoyancy and reducing the draught, it added.
Following its handover, the barge is to be transported to Shanghai where it will be floated on to a semi-submersible transport ship that will take it to South Korea where the first cargo will be loaded.
The transport vessel, barge and cargo will then proceed to the Russian port of De-Kastri on the Sea of Okhotsk where the laden barge will be floated off to start the 2,370 km journey to the construction site.
Remko Bouma, sales manager Damen Shipyards North West & South Europe, said: "It has been a challenge, but we are delighted to have delivered this latest order from Combi Lift on time and on budget."
"We’d like to thank them for their confidence in us. The relationship between our two companies has been further strengthened as a result and we wish them safe and successful operations with the Tomsk," he added.
"Once again, we would like to thank Damen for the exemplary support and the great cooperation," said Holger Hinrichs, Managing Director of Combi Lift. "Tomsk is a cutting-edge vessel which represents an important enhancement of our tugs and barges fleet," he added.-TradeArabia News Service
Share