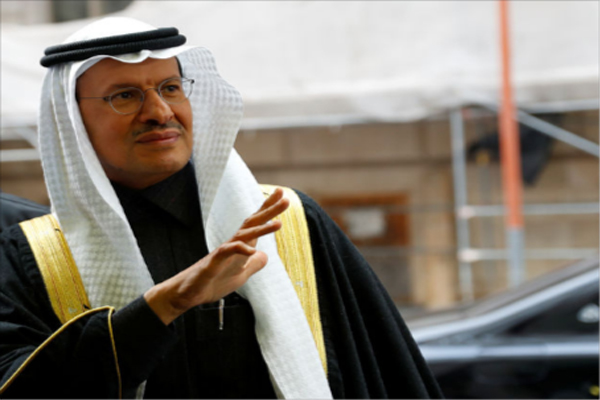 Prince Abdulaziz Bin Salman
Saudi Energy Minister Prince Abdulaziz Bin Salman has read the International Energy Agency's (IEA) recent blockbuster report outlining a road map for the world to achieve net-zero carbon emissions by 2050 and is not impressed.
"I would have to express my view that I believe it is a sequel of [the] La La Land movie," Prince Abdulaziz told reporters after Opec+ ministers met to affirm production levels through July. "Why should I take it seriously?"
The IEA's road map concluded that if the world were to slash carbon emissions to net-zero over the next three decades, global oil supplies would need to shrink more than 8% annually, down to 24 million bpd in 2050, from pre-pandemic levels of just above 100 million bpd, a Saudi Gazette report said. That would mean no new oil and gas upstream projects should be developed.
But it is not only the IEA that has roiled the oil industry. IOCs are scaling back major swaths of their oil and gas portfolios under environmental pressure from regulators, climate change activists and investors.
Within a span of two days in late May, shareholders at ExxonMobil and Chevron delivered sharp rebukes to the companies over their sustainability plans, while a court in the Netherlands dealt a landmark ruling ordering Shell to cut its emissions.
For Saudi Arabia, the largest exporter of crude and owner of the world's most valuable company in oil giant Aramco, there is no existential angst, Prince Abdulaziz said.
In April 2020, as the global oil market cratered from the pandemic and Saudi Arabia launched a price war against Opec+ ally Russia in a dispute over production policy, Prince Abdulaziz directed Aramco to boost its crude production capacity to 13 million bpd from its current 12 million bpd, not including the Neutral Zone the Kingdom shares with Kuwait.
Aramco, holder of the exclusive rights to pump crude within Saudi Arabia, is currently conducting engineering studies on how to achieve the target, which would come at a cost of several hundred millions of dollars.
"Don't be surprised if we come back with additional announcements" of further expansions, Prince Abdulaziz said, though he declined to elaborate.
OVERLY AMBITIOUS
Opec, of which Saudi Arabia is the largest producer, has warned that if governments heed the report and follow its recommendations, the oil market would be destabilised and fossil fuel investment jeopardised, endangering the economies of its members.
"The claim that no new oil and gas investments are needed post-2021 stands in stark contrast with conclusions often expressed in other IEA reports and could be the source of potential instability in oil markets if followed by some investors," Opec said in a report to members seen by S&P Global Platts.
Opec added that "while the [net zero] scenario seems overly ambitious in terms of assumptions and results, it will certainly influence investment decisions, which may curb demand (growth) for fossil fuels, such as oil and gas, as many policymakers and oil and gas companies use the IEA's scenarios for their strategic planning."
Saudi officials, including Aramco CEO Amin Nasser, have repeatedly said they expect oil to remain a dominant energy source for decades to come, and the company's cost of production rank among the industry's lowest, owing to the country's vast and relatively easily accessible crude reserves.
That makes Saudi Arabia a likely survivor, even if peak demand scenarios come to pass and global oil demand shrinks. The country still has some 300 billion barrels of proven oil reserves, according to BP's latest statistical review, well ahead of Russia and the US. Based on average 2019 production of close to 9.8 million bpd, Saudi oil reserves would last more than 82 years.
By contrast, most European energy majors are already planning to wind down their oil and gas portfolios in the coming years and shift to renewables to help cut emissions.
With growing shareholder activism pressuring listed Western energy majors to ditch their fossil fuel, state-run oil majors like Aramco less exposed to public pressure are well placed to pick up the slack, market watchers believe.
LOW-COST OIL
Although Aramco has slashed cut its capex budget for 2021 due to the fiscal strains caused by the pandemic, Saudi officials say production capacity expansion is still a strategic aim.
Saudi Arabia is the market's primary swing producer, showing the most willingness among producing nations to tighten its taps to prevent price crashes, while also unleashing its spare capacity in times of supply tightness.
Saudi Arabia pumped 8.48 million bpd in May, Prince Abdulaziz said, rising to 9.49 million bpd in July under the Opec+ supply accord.
But though oil makes up the vast majority of Saudi Arabia's revenue, it is also investing in other forms of energy, he said, to forge a balance between monetising its hydrocarbon resources and also being an environmentally conscious country.
The kingdom in recent years has announced several solar projects, including its first utility-scale renewable development, the 300-MW Sakaka solar power plant, as well as billions of dollars in investment in hydrogen facilities.
"Saudi Arabia is no longer an oil country, it's an energy-producing country," Prince Abdulaziz said.
"Not only we are an energy country, we are a very competitive energy country, and we are low-cost in producing oil, low cost in producing gas and low-cost in producing renewables and will definitely be the least-cost producer of hydrogen. I urge the world to accept this as a reality. We are going to be winners of all these activities," he added. -- TradeArabia News Service
Share