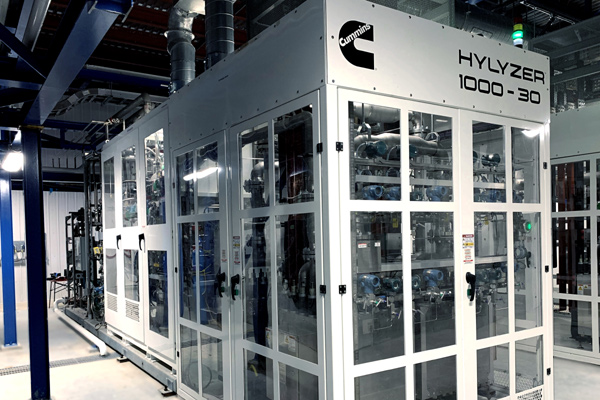 Cummins HyLYZER PEM Electrolyzer
Cummins has been expanding its footprint across the world with its hydrogen technology, for a sustainable present and the future, the recently conducted 2nd Mena Energy Meet heard.
Alan D Kneisz, Cummins Global Business Development Director, elucidated the company’s energy transition endeavour. As part of his presentation, he explained how Cummins, with its research and innovation prowess, has been at the forefront of low-carbon technologies, and with its 70+ years of electrolysis and over 25 years of fuel cell production experience, has built a diverse Hydrogen Technology portfolio and expertise in Battery, Fuel Cell and Hydrogen Production Technologies.
Kneisz shed light on how the demand for fossil fuels might dramatically decrease by 2030, giving rise to hydrogen energy demands, and how the Mena region is poised to become a world leader in fulfilling the same.
He expounded on the region’s potential because of the captive markets both locally and in Europe, having large demands of Green Hydrogen with aggressive decarbonisation targets.
Showcasing the highlights of Cummins' global leadership in Electrolysis and Fuel Cell Projects and its Green Hydrogen Ecosystem, the presentation also encapsulated the Cummins product line - for both stationary and mobility applications, and the world's most advanced Fuel Cell Modules.
The audience was led through the benefits of the advent of the hydrogen ecosystem - leading to zero emissions, and as a low-cost alternative over CCUS. The focus was also on ease of adoption, achieved easily through zero-emission funding for carbon reduction in cities and with local partnerships.
Touching upon the much debated topic of scalability, Kneisz justified how Cummins is well placed to achieve the same for Hydrogen and Fuel Cells production and deployment in the Mena region, a fact backed by their real-world implementations in commercial applications which includes the world's first large FCEV bus fleet and the world’s largest fuel cell project with Alstom.
He concluded by stressing on the economic ability of Cummins to deploy large-scale hydrogen projects, reinforced by its global presence, mass production facilities, and the active participation in different global energy councils (such as hydrogen councils) that makes the company a trusted player to meet the needs of the growing hydrogen economy.
To sum up, the 2nd Edition Virtual Mena Energy Meet from August 30 to 31 was an abode of knowledge where different speakers shared their expert views on the trends and developments in the energy sector, and highlighted valuable insights into the capability and power of hydrogen to shape its future.-- TradeArabia News Service
Share