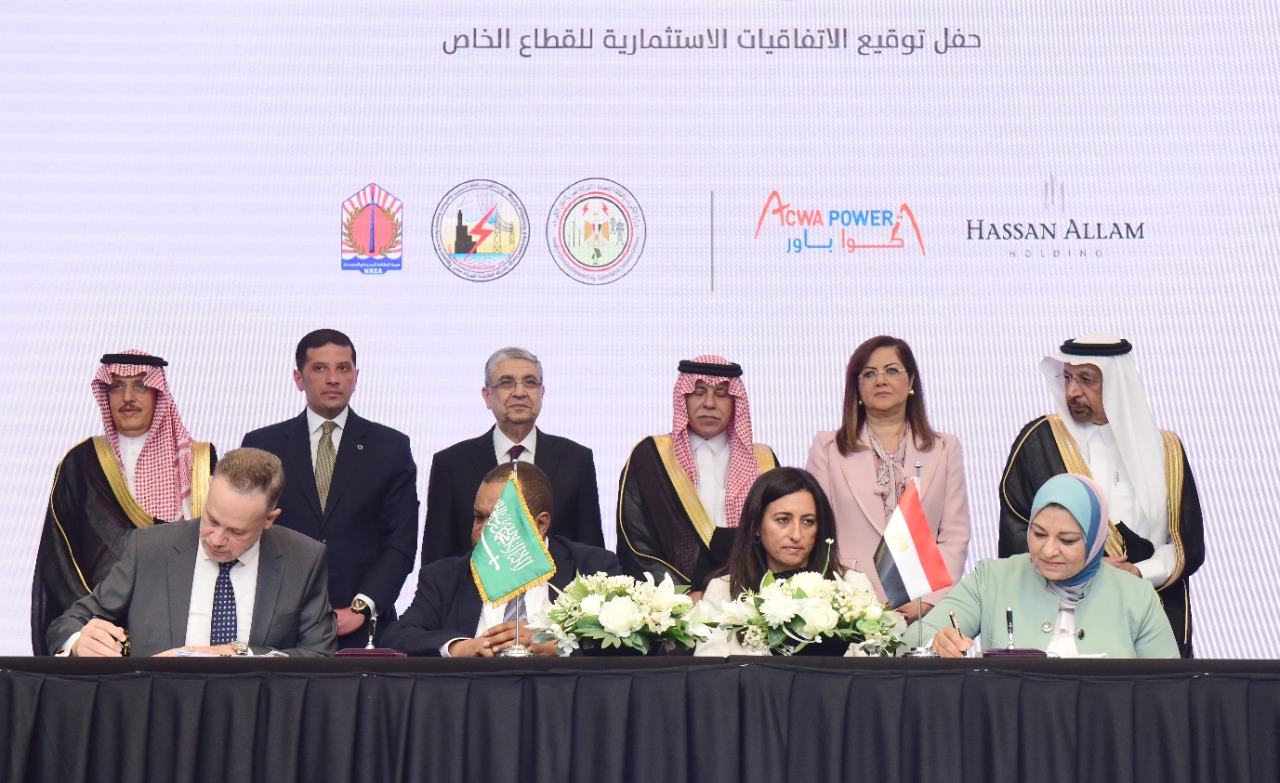 A consortium led by Acwa Power, a leading Saudi developer, investor and operator of power generation, desalinated water and green hydrogen plants worldwide, today (June 21) signed an agreement to develop a 1.1GW wind project in Egypt, at an investment value of $1.5 billion.
The agreement was signed at the headquarters of the Egyptian General Authority for Investment and Free Zones, Cairo during HRH Mohammed bin Salman, the Saudi Crown Prince’s state visit to Egypt.
As per the deal, Acwa Power-led consortium, comprising Hassan Allam Holding, will work together during the development phase to complete the site studies and secure the financing of the facility.
Located in the Gulf of Suez and Gabal el Zeit area, this wind project is the largest single contracted wind farm in the Middle East region and one of the largest onshore wind farms in the world.
The project will be designed to use state-of-art wind turbines with blade heights of up to 220 m which helps in achieving the best use of the designated land plots in the most efficient way.
When complete, the project will mitigate the impact of 2.4 million tonnes of carbon dioxide emissions per year and provide electricity to 1,080,000 households.
The signing ceremony of the agreement took place at the headquarters of the Egyptian General Authority for Investment and Free Zones, Cairo, in the presence of Dr Mohamed Shaker El Markabi, Egypt’s Ministry of Electricity and Renewable Energy; Dr. Majid Bin Abdullah Alkassabi, Saudi’s Minister of Commerce; Dr. Issam bin Saad bin Saeed, Minister of State and Cabinet member for Shoura Council affairs; Dr. Hala Al Said, Egypt’s Minister of Planning and Economic Development; Mohamed Abdel Wahab, CEO of the General Authority for Investment and Free Zones (GAFI); Eng. Osama Asran, Egypt’s Deputy Minister of Electricity and Renewable Energy; Eng. Gaber Desouky, CEO of the Egyptian Electricity Holding Company (EEHC) in addition to Saudi officials led by Acwa Power Chairman Mohammad Abunayyan.
Commenting on the occasion, Dr El Markabi said: "This milestone wind project falls within the framework of the Egyptian government’s strategy to diversify its energy sources and leverage the country’s rich natural resources, especially in renewable energy."
"The ministry is taking concrete actions to ensure the resilience of our energy strategy, because of the escalating changes that the world is witnessing, which aim to increase the contribution of renewable energy to up to 42% by 2035," he noted.
The 1.1GW wind project confirms Egypt’s commitment in spearheading the use of renewable energy sources to reduce the impact of carbon emissions produced by conventional energy sources, as Egypt gears up to host the United Nations Climate Conference (COP 27) in November 2022, the foremost international forum to discuss countries’ efforts in addressing climate change, he added.
Hassan Allam Utilities, the investment and development arm for Hassan Allam Holding, currently operates a 50 MW solar plant in Benban solar park cementing its position as one of Egypt's leading green energy producers.
This is Acwa Power’s third project - and first wind farm - in Egypt, after the 120MW Ben Ban solar independent power projects in the Aswan region and the 200MW Kom Ombo solar plant.
"We are honoured to contribute to the strengthening ties of Saudi Arabia, our home, and Egypt via this milestone wind project, and extend our sincerest gratitude to the leaders of both countries in entrusting their faith in our abilities to realise their renewable energy mandates," remarked Acwa Power Chairman Mohammad Abunayyan.
"With sustainable development at the top of the agenda for both states, progress cannot be made without concerted efforts in expanding infrastructure that is underpinned by renewables," noted Abunayyan.
"This wind project demonstrates a commitment to realising a greener tomorrow, despite global economic volatility, and we look forward to working with like-minded partners for a positive future," he added.
Dalia Wahba, Deputy CEO and Chief Investment Officer of Hassan Allam Utilities, said the project marked an important milestone in Egypt's plans to decarbonise the energy sector and meet its targets under the country’s Intended Nationally Determined Contributions (INDCs).
"We are proud to be part of this flagship project and look forward to a fruitful partnership," she noted.
Wahba said Egypt had embarked on a serious economic reform programme sending a clear invitation to the private sector to support in building a greener and brighter future.
"As a group, Hassan Allam Holding is committed to be a positive contributor to the environment. We are adopting sustainability principles and expanding our investments into large scale green energy projects," she added.
The 1.1GW wind project is forecasted to reach financial close by the third quarter of 2024. The plant will be commercially operational by the end of 2026.-TradeArabia News Service
Share