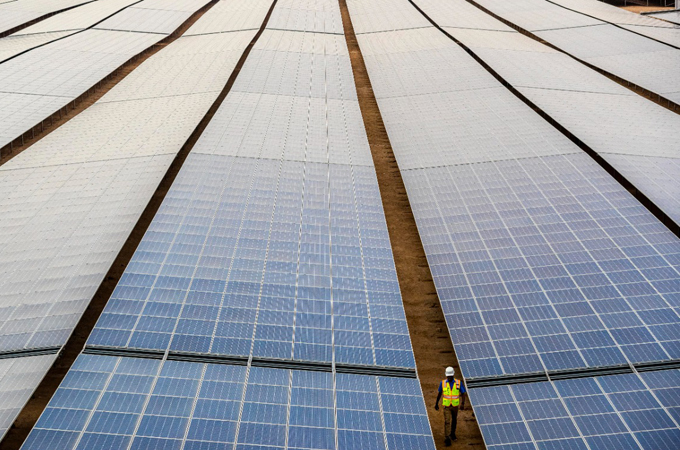 A solar project in Abu Dhabi
The UAE is emerging as one of the world’s biggest state financiers of clean energy, seeking to become as influential in renewables as it currently is in oil and gas, a report in the Wall Street Journal said.
The report also highlighted that while the UAE lays focus on renewables, the country "also remains a major investor in traditional oil and gas", said a Wam news agency report.
Since November, when global nations agreed to accelerate emissions-cutting plans at a United Nations summit, the UAE has said it will fund development of thousands of megawatts of solar-energy projects in countries across the world. It has committed $400 million to enable developing nations’ transition to clean energy and pledged to help supply green electricity to 100 million Africans by 2035, the WSJ report said.
The Gulf state, alongside the US, also has promised to raise $4 billion to invest in technologies that would transform agriculture and food production to limit climate change.
Emirati officials hope the bet on clean energy not only will help diversify the country’s oil-dependent economy but also increase its diplomatic clout and shift perceptions of the Gulf state, it said.
Already, the renewables arm of Emirati sovereign-wealth fund Mubadala Investment Co has deployed more than $20 billion in clean energy projects since it began investing in renewables in 2006, outstripping other state investors or public pension funds, according to New York-based research firm Global SWF, though the UAE investment in oil-and-gas related businesses remains higher.
By the end of this decade, the UAE, the world’s seventh-biggest oil producer, wants to invest and develop projects generating up to 100 gigawatts of clean energy at home and abroad, four times its current deployment and commitments, the report said.
To achieve that goal, the government is now bringing together its national oil company and power-generation firm with Mubadala to own jointly the country’s renewable investment and development arm, Masdar. The merger will consolidate renewable assets under one brand and help the government to achieve net-zero emissions by 2050.
Sultan Al-Jaber, the country’s climate envoy and Minister of Industry and Advanced Technology, said change could only be tackled alongside hydrocarbon-producers who help manage the global transition to clean energy.
"We can’t continue to view oil and gas as a challenge," Al Jaber, who is also the CEO of the national oil firm Adnoc and Chairman of Masdar, said in an interview. "Oil and gas should be seen as the bridge as part of the solution."
Share