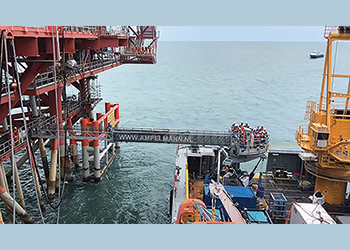 Ampelmann’s AEP system operating off the East Coast of India

The AEP system was a suitable choice considering strong winds, high waves and mostly unpredictable weather conditions can slow down or even put work on hold during the monsoon season in India

One such contractor is McDermott, a global offshore engineering and construction company, with which it signed an agreement to use its A-type Enhanced Performance (AEP) system for the first time, off India’s East Coast.

The project, with a duration of approximately 50 days, is taking place during monsoon season in India. Strong winds, high waves and mostly unpredictable weather conditions can slow down or even put work on hold during this season. The Ampelmann AEP system was, thus, the suitable choice for these conditions.

The AEP is based on the design of the original A-type, yet provides higher workability. AEP makes full use of Ampelmann’s motion compensation technology, enabling safe personnel transfers in sea states up to 4 m Hs, allowing for more uptime and higher efficiency, also during monsoon.

'While it will be the first time for Ampelmann to operate on the East Coast of India, it definitely isn’t our first time operating during monsoon,' says Vincent Chua, Ampelmann’s Commercial Manager in Singapore.

'Our systems have continuously proven themselves during the monsoon season, maximising operational availability and safety for the offshore crew. With an increased uptime, we can reduce the amount of waiting on weather (WOW) days and decrease the overall duration of projects.'

The Ampelmann AEP was mobilised in Singapore on the MVW Falcon during strict lockdown regulations as set by the local government because of Covid-19. Ampelmann’s local team in Singapore managed to execute the mobilisation on short notice, proving the importance of local setups in order to be of the best possible service to their clients during challenging times.

Ampelmann is also active in the Middle East, where it recently completed a major milestone of reaching one million safe personnel in nearly a decade of operating in the region. The achievement was reached during a project with vessel owner Halul Offshore Services Company, a subsidiary of Qatar-based Milaha enabling maintenance, well services and shutdown work.

Milaha’s President and CEO, Abdulraham Essa Al-Mannai, says: 'The safety of our workers is absolutely paramount, and we are delighted to be a part of this incredible milestone achieved by Ampelmann. We have worked closely with our friends from the Netherlands for some time, and the relationship has always been a positive one. We look forward to continuing our first-class collaboration with Ampelmann into this new decade.'

The A-type system has been operating on the Halul 43 vessel since the beginning of 2020, and will continue to do so for a minimum of 150 days.

In promoting the benefits of W2W further throughout the region, the Dutch company has also been reaching out to new markets. It recently completed its first project in Oman, a shutdown campaign with the L-type. 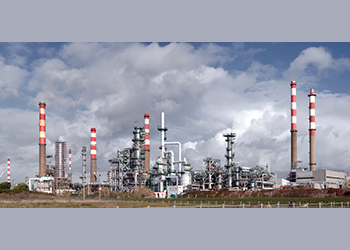 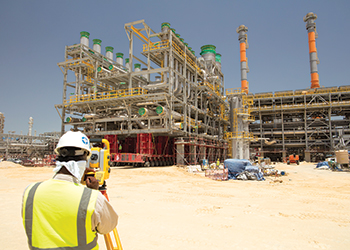 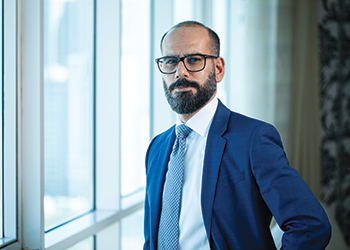 Simple ‘what if’ put Petrofac on the digital pathway 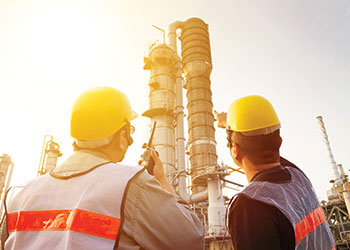