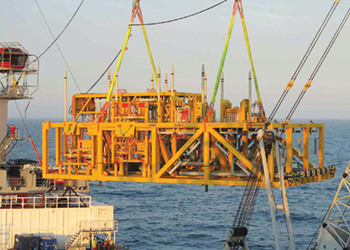 Mads Hjelmeland, Head of Processing Systems Projects at OneSubsea, discusses developments in subsea processing, boosting, and compression and their role in driving low-carbon production systems amid the global energy transition

In June 2021, Schlumberger announced its commitment to net zero by 2050. With minimal reliance on offsets, Schlumberger’s net-zero targets cross all of Scope 1, 2, and 3 emissions, thus covering the entire company value chain.

In terms of working with customers to reduce their emissions, Schlumberger has introduced its transition technologies portfolio, which comprises technologies and solutions that enable more sustainable operations while simultaneously driving efficiency, reliability, and performance.

The subsea factory vision has been presented in several ways. However, all scenarios require the use of modern subsea technology in the form of seabed processing.

Seabed pumping, compression, and separation represent the core of this modern technology — comprising the heart of the subsea factory. Subsea processing adds energy directly onto the well stream or removes resistance in the system, handling challenges of water depth and long tieback distances as well as low energy reservoirs.

Over the past five years, large advancements have been made in the subsea processing space. This includes the deployment of seabed single-phase boosting in the Stones Field — the world’s deepest oilfield.

In the Gullfaks Field in the North Sea, the subsea domain has seen successful and continuous operation of the world’s first wet gas compression system. And in the Gulf of Mexico, the successful high-impact multiphase boosting across an oilfield tieback of more than 30 km was witnessed.

For more than 20 years now, subsea processing has been installed in every subsea province. The technology applications include subsea multiphase and single-phase pumping, as well as compression and separation systems.

Since 1997, more than four million running hours of subsea rotating machinery have been achieved.

It has been demonstrated that the application of subsea multiphase boosting can result in increases of production rates by 20 per cent to more than 200 per cent, in addition to a substantial increase in total recovery as backpressure on the reservoir is offloaded by a seabed processing system.

These large increases in production and recovery, seen against the incremental investment in this technology, are typically less than $10 per barrel.

This low-cost additional oil and gas is low risk—especially when compared with costs for new drilling and exploration—as the reservoir and production characteristics are typically known.

With the application of subsea processing technology, carbon footprint can be reduced by more than 50 per cent compared with more traditional approaches, such as gas lift or topside process solutions. There are a number of examples, in both greenfield and brownfield applications, where production is optimised and CO2 emissions reductions are achieved.

• Greenfield factory enables capital efficient tieback solution: The Greater Enfield project in Western Australia was developed as a tieback of more than 31 km to an existing FPSO that was serving the producing Vincent Field.

The field layout was an optimised solution for a highly complex field architecture.

Due to the long tieback and pipeline friction, coupled with heavy oil that would be produced, an integrated subsea boosting and production system was deployed in the field, leveraging a 5 MW subsea factory to boost production back to the existing FPSO at sustainable production levels.

For this project, an alternative development option could have been a standalone FPSO infield. However, by deploying the greenfield subsea factory, an 85 per cent reduction in associated CO2 emissions was achieved, as compared with the alternative.

To put this into context using the Environmental Protection Agency (EPA) conversion factors, this subsea factory tieback solution will lead to a reduction in emissions close to 3 million tons of CO2 equivalent over an operational period of 10 years.

• Brownfield factory to maximise recovery: An example of a brownfield success story is the installation of a subsea multiphase boosting system in the Vigdis Field in the North Sea. In production for more than 20 years, the field ties back to the Snorre A facility.

The deployment of the Vigdis boosting system will boost production from this asset over a 6.5-km tieback, leveraging existing infrastructure, hence optimising the total investment. Increased production of more than 16 million barrels of oil is expected, and general comparisons with the use of gas lift to achieve the same produced volume indicates a reduction of more than 50 per cent in terms of energy consumption and associated CO2 emissions, eliminating 200,000 tons of CO2 equivalent over 10 years.

The Vigdis boosting system is also leveraging an all-electric control system, paving the way for further electrification of subsea facilities worldwide in the years to come.

• Unlocking sustainable value through brownfield compression factory: The Ormen Lange Phase 3 project currently underway is an example of the deployment of a brownfield subsea multiphase compression system in a field that was put on stream in 2007, unlocking a significant amount of value in the form of increased recovery from this giant gas field.

The multiphase compression system will be installed on the seabed at 900 m depth approximately 120 km from shore, setting a new world record for subsea compression power step-out.

The project is designed to unlock an additional 30 to 50 billion cu m of natural gas, increasing Ormen Lange’s overall recovery factor from 75 to 85 per cent.

The subsea compression system will be powered with hydro-generated electricity from the Nyhamna onshore gas processing plant.

This is the world’s first example of a subsea processing system that completely removes the need to build and operate a platform, the very representation of a ‘subsea-to-beach’ development, and accordingly a major milestone for the industry.

Project development costs have been significantly reduced as compared with alternative concepts and this is a strong indicator of the competitive value of the subsea factory, provided the right technology is implemented.

The subsea factory that will be installed in the Ormen Lange Field will enable significant reduction in energy consumption, and thereby CO2 emissions, as opposed to a topside compression platform. This demonstrates the enormous contribution of the subsea factory and the potential to greatly reduce the carbon footprint associated with these field developments. The gas produced in the Ormen Lange Field is exported to the UK and represents an approximated 20 per cent of the UK energy supply. This gas is a major contributor toward a coal-free UK, which in turn is helping reduce emissions further as coal is replaced by gas at lower-carbon intensity.

Subsea processing is a key technology for the future. Even with the rapid deployment of renewables, blue hydrogen — from natural gas or natural gas power generation with or without carbon capture, utilisation, and storage — will be a major contributor to the energy mix in the next decades.

Accordingly, the unparalleled energy efficiency and recovery factor associated with subsea processing is enabled by technology that is powering an exciting oil and gas energy transition.